BenQ recently released an all-new projector called BenQ TH585. Here, we’ll compare it with the Optoma HD146X to determine which is the right buy. There is a good deal of demand for both of these projectors among gaming and sports enthusiast communities. This is because their input lag is low and their lumen output is high. 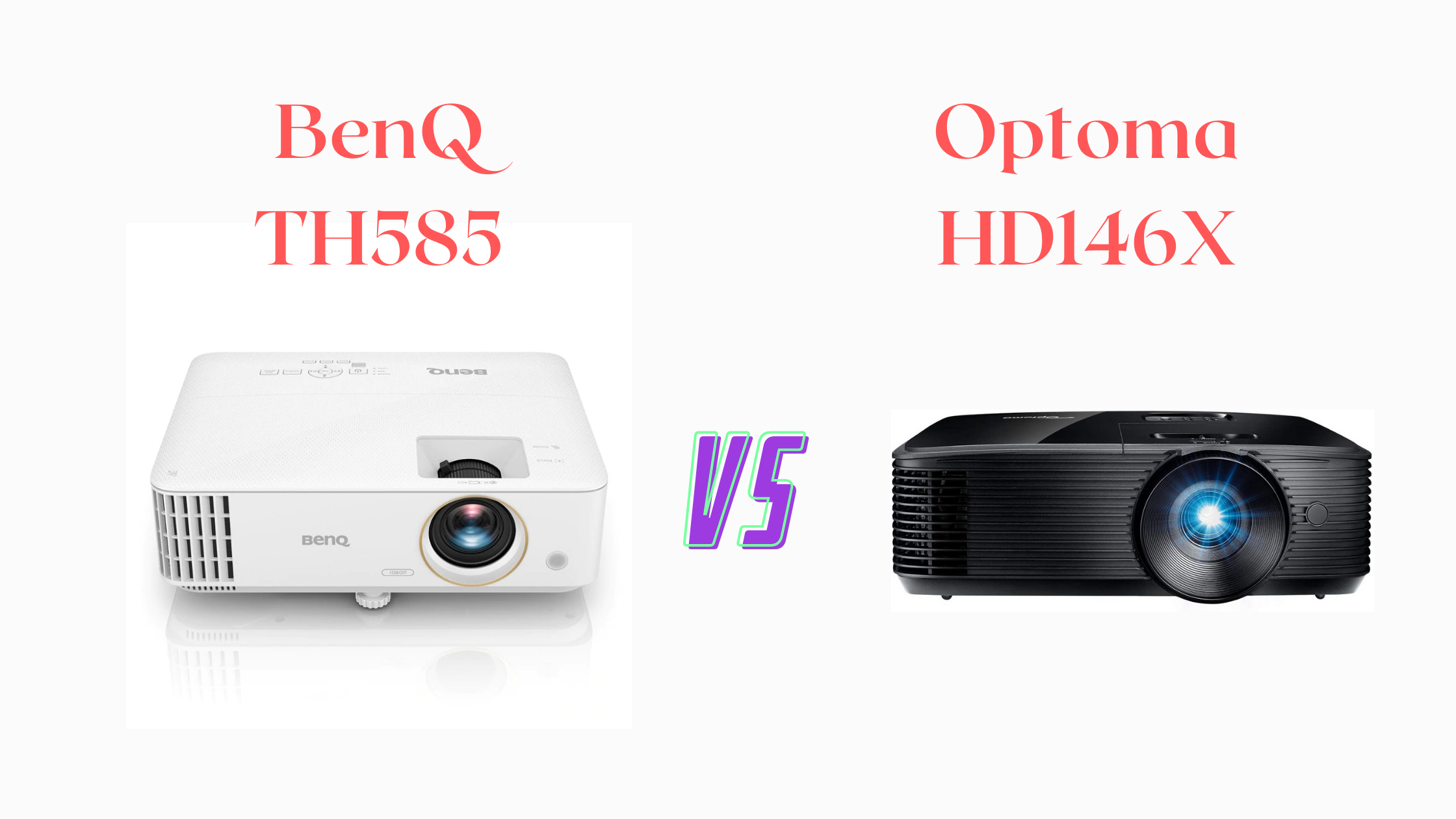 Gaming requires exceptional lighting so that you do not miss the sight of critical objects. This has been acknowledged by both BenQ and Optoma and they have incorporated higher brightness in these projectors to provide the best possible gaming experience.

The brightness of Optoma HD146X is 3600 lumens, however, TH585 features 3500 lumens. Optoma HD146X is only 100 lumens more, not a big difference. So, both of them are ideal for living room entertainment even though you have a well-lit ambiance. Optoma HD146X wins marginally here.

With a good contrast ratio, bright scenes appear clear and crisp, whereas dark scenes are rich with deep blacks and exceptional shades of light and shadow detail.

As you can see, the Contrast Ratio of Optoma HD146X is way more than that of BenQ TH585, which makes it a winner in this segment. So Optoma HD146X can display those blacks in their true format than BenQ TH585.

According to Optoma, the HD146X has a Dynamic Black Technology that gives more depth to your image by adjusting lamp output by smoothing the brightness information for every frame; creating an unmatched contrast ratio.

Although these numbers might not appeal to home theater enthusiasts, they are more than enough for gamers and sports fans. With a higher contrast ratio than BenQ TH565, Optoma HD146X is more suitable for gamers who watch movies regularly and play games.

With both BenQ TH585 and Optoma HD146X, you can digitally adjust the image to make it a perfect rectangle if you’re projecting it onto an angled surface.

In Optoma HD146X you can adjust the keystone vertically up to 40 degrees, however, BenQ TH585 can be adjusted vertically up to 30 degrees. Again, there is not a big difference, but Optoma has an edge over BenQ.

There’s nothing more annoying than hearing the projector’s noise in the middle of a dead silent horror film. The noise value emitted by the projector is often disclosed by the manufacturer. It is essential to use a less noisy projector for this reason, especially for those seated close to the projector.

Optoma HD146X produces the least noise level 26dB than that of BenQ TH585 which makes a noise at 35/29 dB which is louder than Optoma HD146X.

Compared with a BenQ TH585, Optoma HD146X has better contrast levels, a less noisy fan, and a greater keystone range, making it a worthy opponent to buy. Nevertheless, if you prefer BenQ in general, you cannot go wrong.