So you are either upgrading your home theater to the next level or exploring setting up a new home theater. Whatever is the reason, you have zeroed on to Sony VPL-VW295ES and Epson Pro Cinema 6050UB and unable to conclude. In this comparison article, we’ll go through the specs of both these projectors and see which one fits your choice. 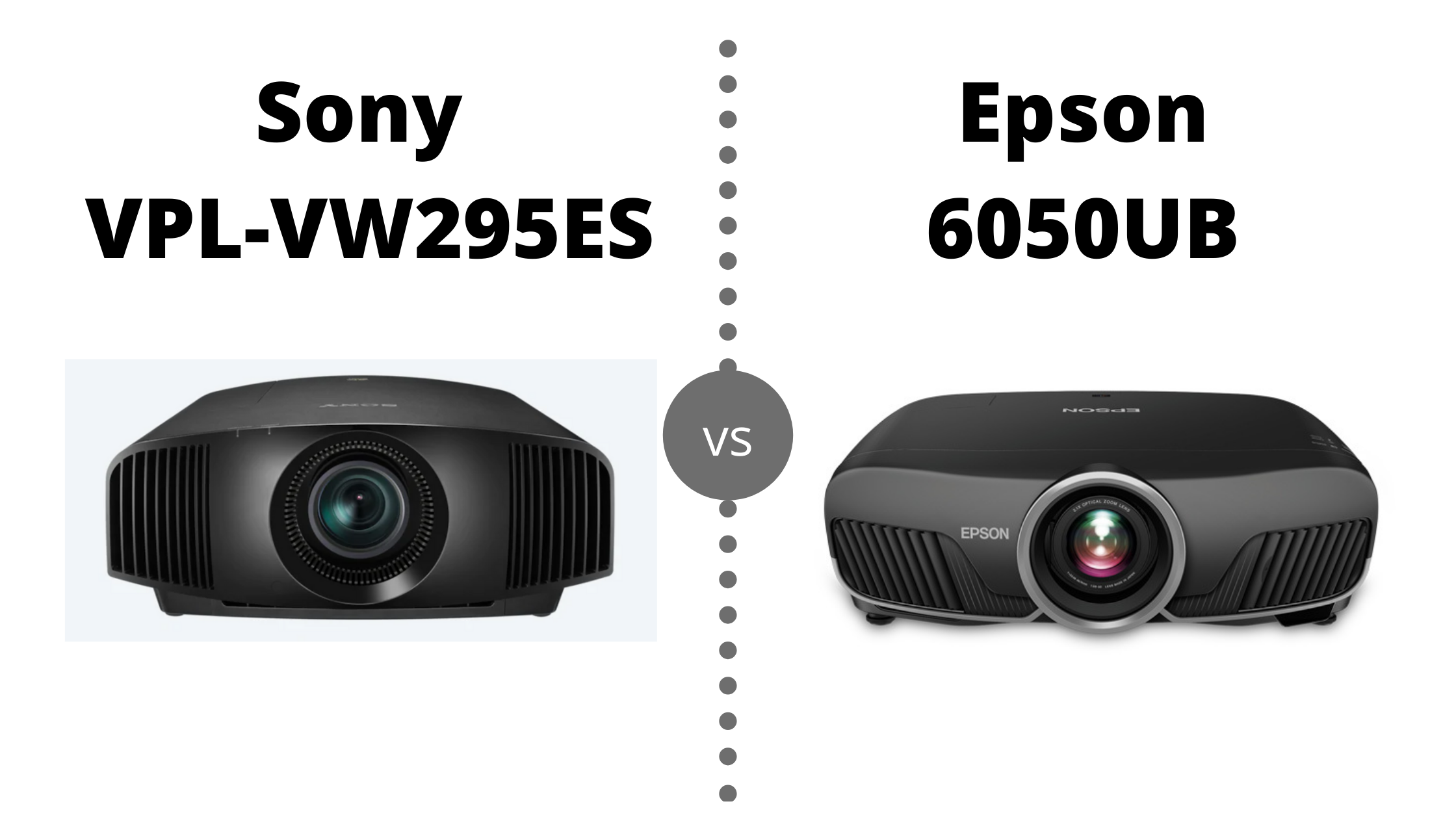 Before proceeding, let me show you quickly the key differences between both projectors in a table format.

One of the major differences between Sony VPL-VW295ES and Epson Pro Cinema 6050UB is the 4K projection. VW295ES natively supports 4K resolution whereas 6050UB is based on 4K enhancement technology that shifts each pixel diagonally to achieve double Full HD. So, even with the pixel shifting technique, 6050UB cannot produce a full 4K resolution.

However, VW295ES can produce native 4K with no enhancement techniques. So, Sony VPL-VW295ES is the clear winner here.

That being said, the difference between the picture quality would be very marginal, unless you are peeping the pixels from a close distance. Video formats where actions and motions are better rendered by Sony than Epson.

Sony VPL-VW295ES uses its SXRD technology based on LCoS for projecting the content, whereas Epson Pro Cinema 6050UB uses its 3LCD technology for projection. Basically, both technologies split the light into 3 beams, red, green, and blue before combining them to form a colored image.

Since VPL-VW295ES uses LCoS, its light path is sealed and dust cannot land into the system, whereas in Epson’s 6050UB which is based on 3LCD technology, the light path is not sealed, so there is a chance of dust landing on their panels causing dust blobs. This could be the reason Epson provides a 3-year warranty where it does cover cleaning the dust blobs.

Sony VPL-VW295ES offers only 1500 lumens, however, Epson Pro Cinema 6050UB offers 2600 lumens, which is 1100 extra lumens for the Epson model. However, if you need the projector for your home theater which you’ve set up in a dark room, you wouldn’t require high lumens, under 1000 would also be fine. So that way VW295ES will not lose anything here.

But the problem comes when you want to play a 4K HDR content, where you would require more lumens, which is one of the minus points of VW295ES. However, Epson Pro Cinema 6050UB can offer up to 2600 lumens, which can be handy when you play 4K HDR content, though it can only play half of what a 4K resolution is. So, if you are planning for your darkroom, go for Sony. If you are planning for your living room that has ambient light, go for Epson.

A good contrast ratio gives a pleasing experience of those shadows, and Epson 6050UB shines here by producing a dynamic contrast ratio of 1,200,000:1. But Sony doesn’t reveal the contrast ratio specs but falls short by saying improvements to reflective silicon layer for precisely delivered shadows and blacks.

If a good contrast ratio is your preference, it would be better to go with Epson.

Apart from these differences, both the projectors are more or less similar in specs. Both have 2 HDMI ports with 18Gbps speed, which help in transferring high-quality 4K content and a superb gaming experience with low input lag. Both can play 3D movies, support streaming content with the help of HLG.

Both are flexible enough to install with their 2.1x zoom ratio and wide lens shift range they offer. They can produce a wider color gamut, reaching up to 100% of the P3/BT.2020 color range to achieve color accuracy.

You’ll not go wrong with either, but if you want a true 4K experience, look no further and pick Sony VPL-VW295ES provided you have or can create considerable dark ambiance. It can project content at 60 frames per second in 4K, resulting in even smoother images of superior color and vivid detail. Pick Epson Pro Cinema 6050UB, if you are planning to watch more HDR content.